Flood walls in Samoa financed by the UN’s flagship climate fund are inadequate and could put people in danger, experts warn

Concerns have been raised about a $66 million flood management project financed by the Green Climate Fund in Samoa, after river walls failed to protect a hotel from flash flooding in December.

The project was approved at a GCF board meeting in the Samoan capital Apia in December 2016, held at the Sheraton Samoa Aggie Greys hotel. That same hotel was forced to close after heavy rainfall caused the Vaisigano river to burst its banks on 18 December 2020, swamping conference rooms.

A technical expert with knowledge of the project, who asked not to be named, said the first set of flood defences had been badly built, with little or no analysis of the force of water they would need to withstand.

“It is disgraceful,” the expert told Climate Home News. “They have wasted a lot of money on building those walls – they are not structurally sound. When there is a flood and sea level rise, it is going to put a lot of people in danger.” 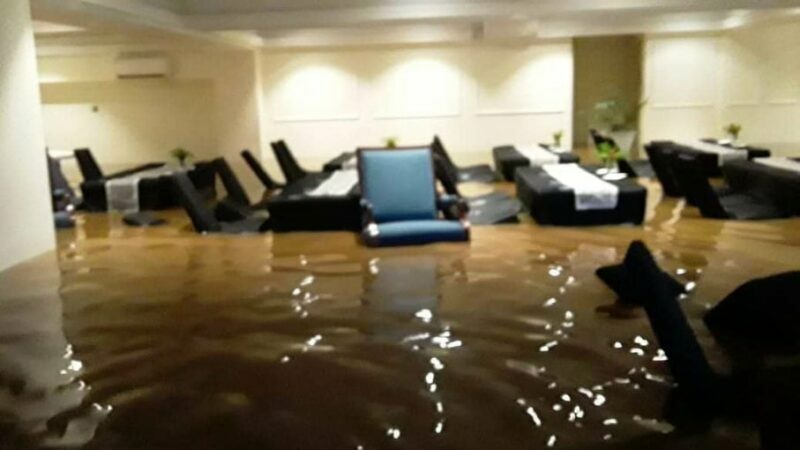 A conference room of the Sheraton Samoa Aggie Greys Hotel in December 2020, after the Vaisigano River breached flood defences and swamped the property

The flood management project was developed by the Samoan government in partnership with the UN Development Programme. It aims to protect people and infrastructure including schools, hospitals, government buildings, businesses and homes from recurrent flooding of the Vaisigano river catchment, particularly associated with severe tropical storms.

Before considering the funding proposal, board members visited communities hard hit by Cyclone Evan and associated flooding in 2012. They spoke in the board meeting about how moved they were by the experience and approved the project with little hesitation.

By the end of 2019, $12 million had been disbursed and three sections of flood defence built, including “segment one” of a river wall around Aggie Greys hotel, according to the annual performance report. These were trumpeted within the UN-backed fund as ‘built by the GCF’, according to the expert source.

However in response to questions from Climate Home News, GCF spokesperson Simon Wilson said the fund’s planned flood walls under the project, which would be designed to protect against a 1-in-50 year rainfall event, had not been built yet. The work carried out to date was to “augment existing flood wall construction” in response to damage caused by a cyclone in 2018.

Earlier flood defences had been financed by the Least Developed Countries Fund. 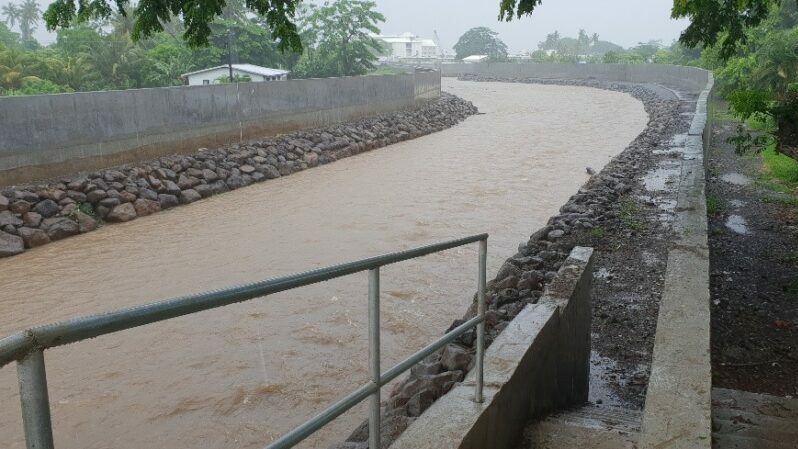 According to the UNDP “segment one” was designed to withstand a level of rainfall expected to strike once in 20 years and built according to national and international standards. The Samoan ministry of works oversaw construction. The wall remained intact after December’s rainfall, which was judged to be a 1-in-25 year event.

Water breached the river banks at segments two and three, where walls have yet to be built, flooding areas including the hotel, said a UNDP spokesperson. “While the flood walls adjacent to the hotel assisted with reducing the flooding and remained intact, it was not able to completely eliminate flooding in the hotel…

“Our expectation is that once the GCF funded protection works in segment two and three are completed the vulnerability of lower lying areas of the floodplain should lower.”

The technical expert highlighted flaws in the walls constructed to date, based on pictures shared by colleagues in 2019, including a lack of ballast behind the wall to stop it flipping under heavy river flow.

Independent civil engineers shown photos of the construction echoed those concerns. “It seems that no-one has taken the trouble to calculate the overturning moment generated by the flood water and provided a means of resisting that moment,” said consultant John Knapton.

Wilson said the GCF followed up on those concerns with UNDP following a trip to Samoa in 2019 and recruited an independent agent to carry out an assessment visit “as soon as the evolution of the Covid pandemic makes it possible”. That assessment will feed into a GCF review of the detailed designs for the next phase of work, he said.

The UNDP spokesperson said the gap in the wall was there to allow for a bridge to be built, which was completed in August 2020. 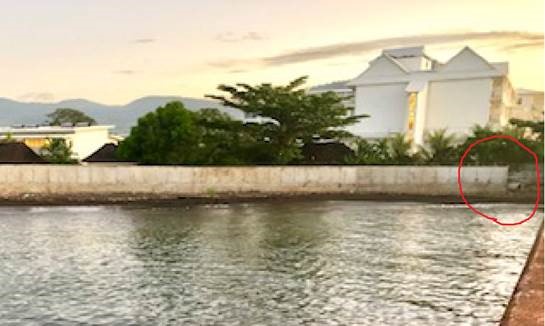 The wall built along the Vaisigano river in 2019. Experts warned the gap in the wall could cause the whole thing to fail

Liane Schalatek is a climate finance expert with the Heinrich Boell Foundation who has followed the GCF since its inception. She said that while she could not comment on the specifics of the Samoa case, civil society had long called for better independent monitoring of project implementation.

“Currently, GCF implementing partners mainly self-report in an annual performance report how well project implementation is going. Only in rare cases and with massive red flags might the secretariat follow up with a site visit,” said Schalatek.

This article was amended after publication to include further information provided by UNDP about the building codes followed and work carried out in 2020.

The Paris Agreement Five Years On